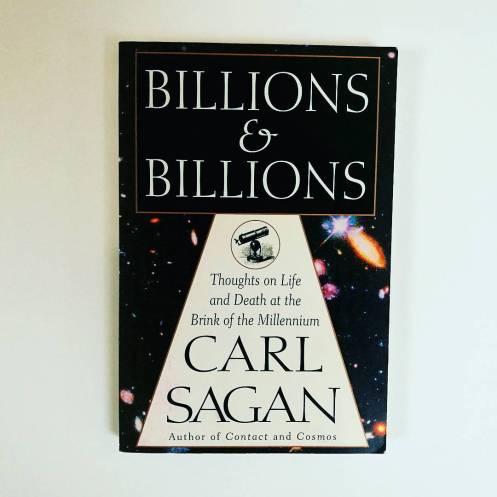 Celebrated astrophysicist, cosmologist, astronomer, astrobiologist, Pulitzer-winning writer, and world-renowned scientific genius Carl Sagan was a man that wore a multitude of hats. And boy, how he wore each hat so well! Beyond being a highly lauded scientist, he was a pop culture icon that brought the most complex of scientific ideas into the everyday consciousness of the everyman.

In Billions and Billions: Thoughts on Life and Death at the Brink of the Millennium, Sagan condenses a plethora of scientific learnings and juxtaposes them with his views on humanity’s role in preserving the Earth and all its lifeforms. To quote the great scientist,

“We are privileged to influence and perhaps control our future. I believe we have an obligation to fight for life on Earth—not just for ourselves…”

He teaches this essential lesson through a series of essays (and transcribed speeches) dealing with various and seemingly disparate topics. Some of the topics tackled in his essays include the power of exponential notation and growth, man’s quick but ultimately limited progress in exploring the mysteries of the universe, the importance of morality, the great debate on abortion, the possibility of extraterrestrial life, how man is destroying the world through global warming, and the razor-sharp and double-edged sword that comes with technological growth.

Now, if that last sentence reads like a mouthful, that’s only because the book itself is overflowing with information that spans, not just the scientific plane, but the moral, the political, and the philosophical arenas of thought as well. Mind-blowing is one of the quickest terms that come to mind when I think of Billions and Billions, but it is a word that still feels greatly lacking. I’ve been awestruck by truly great text before, by works like A Room of One’s Own, An Unquiet Mind, and Existentialism is a Humanism. But this is the first time I’ve been both awestruck and struck dumb by one book.

Carl Sagan was truly a man that was larger than life, and much of his learnings (both personal and academic) have been poured out into the essays in Billions and Billions. I feel that any attempt from my end to come up with a standard review for this book will only come out clumsy and wanting. So, in lieu of an actual review, let me instead present to you a list of my favorite quotes and lessons from Billions and Billions. (Sagan’s quotes are in italics.)