My month-long Austen Marathon has turned into a 4-month literary journey. In those four months, I didn’t devour Austen’s works the way I imagined I would. Instead, I went through every novel meticulously, reading and rereading specific pages. I wasn’t merely enjoying Austen’s novels, I was studying them. I was in awe of Jane Austen’s tremendous talent. I was green with envy and lily yellow with despair.

I tried to look at each work as if I were seeing it for the first time—and I succeeded, mainly because of Austen’s terrific storytelling. Whether it’s a first-time or an nth-time read, Austen’s novels always offers something new to the reader. I suppose, that’s why I’m making some changes to my Austen list of favorites.

The following shows the results of my 2012/2013 Austen Marathon.

Least Favorite Work: Mansfield Park. It’s no longer as bad as I used to think it was, but it’s still not as good as Austen’s other works. At least, in my opinion.

Northanger Abbey follows the story of Catherine Morland, an unexceptional young woman from the country, who finds herself suddenly a part of the elegant and complex society in Bath. Under the ‘guidance’ of the vapid, though not cruel, Mrs. Allen, Catherine finds herself acquainted with the wrong crowd.

When she is befriended by the deceitful and coquettish Isabella Thorpe, our unlikely heroine falls under the manipulations of Isabella and her brother, John. For a while, she is bullied into participating in indiscreet activities that could make an impact on her reputation. Take note, reader, these activities are by no means as racy as the sentence might suggest. It is, basically, the reputation you get when you quite literally, ‘ride in the car with boys.’

Mercifully, she is saved from further social mishaps when she joins the company of the handsome, though somewhat unromantic, Henry Tilney, and his lovely sister, Eleanor. As would be expected, she falls for Henry, and there is reason to think that he begins to feel the same for her. The only setback lies in the meddling of Henry’s father, General Tilney. Therein, is the real story, and it starts quite late in the novel.

Although the rest of the novel is pleasant enough to read, Northanger Abbey is a lot like Emma, in the sense that the story is not as rich or eventful as Jane Austen’s other works. Notably, Sense and Sensibility and Pride and Prejudice. What gets the reader through the piece though, is the strength of Catherine’s character.

Yes, Jane Austen does take pains to establish how Catherine is unremarkable in almost all aspects—but she also makes our heroine incredibly interesting. Austen infuses her with youth. Catherine’s curiosity and naivety makes her relatable—and that is the mark of a good character.

Northanger Abbey is often regarded as Austen’s earliest work. This shows, especially in Austen’s immense presence in the text. The author makes her thoughts known in a very direct manner throughout the book. In her latter works like Persuasion and Mansfield Park, you get less of the author in the story.  Some critics regard Northanger Abbey as one of the keys to Austen’s mindset. With little else to go by, Austen having requested that all her letters be burnt upon her death, such personal works as this one becomes crucial to historians, literary professors and majors, and Janeites alike. This novel gives as a clue as to what Austen’s mindset was during the period when she wrote this story.

As a parody of Gothic literature, this book also succeeds in being possibly the most lighthearted and easy-to-read novel from Austen. This is why I highly recommend this book to all first-time Austen/Classic readers. 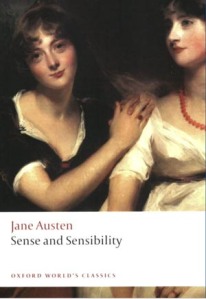 Status: Reread (for the 5th time!)

In Jane Austen’s Sense and Sensibility, we follow the life and loves of two of Austen’s most memorable heroines, Elinor and Marianne Dashwood. Despite the close bond between the two sisters, it immediately becomes apparent how vastly different they are from one another. Elinor is sensible, too sensible for her own good. She is polite to a fault, and somewhat reserved. Marianne, on the other hand, takes after her mother, in the sense that she’s much too romantic, too emotional, and too expressive.

When the novel begins, the sisters live in Norland Park with their mother and younger sister, Margaret. Their father had passed on, and had left them with a small income—a pittance compared to what their half-brother (a product of a previous marriage for Mr. Dashwood), John, received. The entire Norland Park was handed to him. And although he had promised his father that he would take care of his sisters, his selfish wife, Fanny, convinces him that to offer to help his sisters move to a different home is help enough for them.

Meanwhile, we learn of a growing attachment between the ever-sensible Elinor, and Fanny’s brother, Edward Ferrars. Before any formal agreements can be made, however, Fanny learns of their growing closeness and insinuates herself into the thick of things by taking over Norland Park as its new mistress.

Miffed by the sudden intrusion of John’s domineering and snobbish wife, Mrs. Dashwood accepts the offer of lodging from a distant relation—a certain Sir John Middleton from Devonshire. She moves her entire family to Barton Cottage, where the group is warmly received by Sir John and his family. There, the Dashwoods meet the local society. Despite their initial determination to keep to themselves, the family grows close to the affable Sir John, his reserved and elegant wife, Lady Middleton; her gossipy, matchmaking mother, Mrs. Jenkins; and Sir John’s good friend, the honorable Colonel Christopher Brandon.

Colonel Brandon immediately falls for the beautiful and romantic, Marianne. But she remains uninterested and ignores the colonel in favor of the dashing and debonair, John Willoughby. By all appearances, the two appear in love and ready to wed. That is, until Willoughby abruptly leaves Barton Park for London. We later learn that Willoughby has traded Marianne in for a wealthier wife. Although he later attempts to justify his behavior, understanding the root of his greed only humanizes him—it does not redeem him.

As for Elinor, she’s met with an even worse fate. Although Edward does make a brief appearance in Barton Park, we learn that he is engaged to another—the uneducated and cunning cousin of Lady Middleton, Lucy Steele. Though Lucy appears saccharine sweet, she doesn’t fool Elinor (and the reader) for a minute. Lucy is a master of passive-aggressive retaliation. Upon hearing of Elinor’s attachment to Edward, she immediately makes Elinor familiar with her ‘secret’ engagement. Elinor is sworn to secrecy. So while Marianne openly weeps for a lost love, Elinor suffers in secret.

The good news is that both sisters do find their ‘happy ending’. Having proven his enduring love for her, Colonel Brandon eventually wins Marianne over. As for Elinor and Edward, their happy ending comes at a hefty price. Upon learning of Edward’s engagement to Lucy, his mother cuts him off financially. The wealth he stood to earn as the firstborn son was passed on to his vain and selfish brother, Robert—who incidentally, ends up under the claws of the ultra-clever, Lucy.

PLOT: Oh what a tangled web…

There’s a lot that goes on in Sense and Sensibility—but that’s the beauty of this novel. All these twists are integrated perfectly, seamlessly, so to speak. I didn’t feel like anything was ‘forced’ in the novel. When Willoughby and Marianne fell in love in the span of a week, it was relatable. Considering Marianne’s age, (not even 17 at the start of the novel!), it’s easy to see how her world could revolve around the handsome and rugged, Mr. Willoughby.

And though, these days, it may be difficult to find a woman possessing Elinor’s reserve, fortitude, and forbearance, considering the setting of this novel, her behavior makes perfect sense. The novel was set in the years between 1792 and 1797—a time when decorum took centerstage.

Now, I know that some people don’t like the ending—with many wishing Marianne ended up with Willoughby, but I think the ending was apt. The greatest of passions often burn quick and extinguish in the night. The great loves are those that endure, like a slow, steady flame. At least, that’s what I believe—that’s why this book makes sense to me.

One of Austen’s greatest strengths as a writer is her ability to create a myriad of ‘real’ characters—and it really is a joy reading about their interactions. From the passive aggressive arguments between Elinor and Lucy to the impassioned speeches of Marianne and Willoughby, Austen creates a dynamic world filled with dynamic characters. Now, if I were to be nitpicky and pick out the least fleshed-out character, then I’d have to say, Margaret. She’s not poorly-written, not at all. She simply falls into the background and is forgotten for a long time. But all good stories have their wallflowers, so this is hardly a point against Austen or Sense and Sensibility.

Top 5 Characters from Sense and Sensibility:

OVERALL: Definitely worth an annual reread!

Sense and Sensibility never fails to lift my spirits. I try to reread it at least once every few years. If/When I get married, I’d love to hand out this book to my female guests. Maybe fancy pens for male guests. Hmmm.

Elinor:  I do not attempt to deny that I think very highly of him–that I esteem him.

Marianne:  Esteem him!  Like him!  Cold-hearted Elinor!  Oh!  Worse than cold-hearted!  Ashamed of being otherwise.  Use those words again and I will leave the room this moment.

“Can he really love her? Can the soul really be satisfied with such polite affections?  To love is to burn, to be on fire, all full of passion…” – Marianne

“Believe me, Marianne, had I not been bound to silence I could have provided proof enough of a broken heart, even for you.” – Elinor (this line makes me cry—every.single.time.)

“It isn’t what we say or think that defines us, but what we do.”

September is my Austen Month—and what better way to kick-start my Jane Austen Marathon than with her first published work (and a personal favorite), Sense and Sensibility? Yes, I do intend to get swept off my feet by the wicked and dashing Willoughby. I also fully intend on immersing myself completely in Marianne’s and Elinor’s affairs. Never mind that I’ve read this novel far too many times for my own good—five times, but who’s keeping count, right? I will reread each of Austen’s novels and review each work. If all goes well, I’ll also be making side-by-side comparisons when it comes to character development, technique, and the general plot.

That may seem like a tall order, but ever the Girl Scout, I have started reading Sense and Sensibility. I started a couple of days ago and things are just about to get juicy. Just anticipating what will happen next creates a strange feeling in my bosom. A feeling that can only be accurately described as nerdgasmic.

Now, over the last few years, I’ve formed certain opinions about Austen’s works. Let’s see if this year’s marathon will change any of them:

I can see a few changes in that list happening. But I refuse to replace anything without having finished all six of Austen’s novels. Now, I plan on reading her works by order of publication—which means I’ll start off with Sense and Sensibility (1811), followed by Pride and Prejudice (1813), then Mansfield Park (1814), then Emma (1815), then Northanger Abbey (posthumous, 1818), and finally, end with Persuasion (posthumous, 1818). Should be a great month, I think. And, back to reading.

Image: Jane Austen as drawn by her sister, Cassandra Austen. (1810)