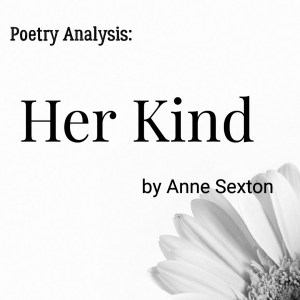 Back in college, quite some time ago, there was this little game I used to play called “100 steps.” I would pace around the university library, meandering through the maze of towering shelves, one hand lightly touching the fabric, paper, and leather spines of the books I would walk past. I would mentally count each step, only stopping on the hundredth mark. Then, I’d pull out and peruse whatever tome I ended up touching last. Not the most fun game around, sure. But it was a great way to find new and interesting reads.

Through this little game, I learned quite a bit about a variety of random but fascinating topics. We’re talking South American courtship practices, the history of polygamy, modern-day bigamy, and my personal favorite—the rise of eating disorders in women during the Victorian era. This little practice also made it easier for me to discover amazing poets like Dorothy Parker, Maya Angelou, and the genius behind today’s featured poem, the controversial and unforgettable Anne Sexton.

A Few Words on the Poet

Anne Sexton (1928-1974) was a Pulitzer-winning American poet known for her incredibly potent and oftentimes dark verse. Like my favorite poet of all time, Sylvia Plath, most of Sexton’s works comprised of confessional poetry that touched on difficult and deeply personal themes like mental disorders, suicide, depression, social stigmas, the struggles faced by women during that period, and the complex and sometimes scarring relationships between the writer and her loved ones.

And just like Plath, Sexton had no trouble mining, exhuming, examining, and using her experiences to say what was generally unsayable. No topic appeared taboo to Sexton—although she did request that The Awful Rowing Toward God be published only after her death. And she really did have a very deep well of experiences to draw from. Throughout her short life—sadly shortened by her own hands, no less—Sexton struggled against multiple episodes of severe manic and depressive attacks.

It was during her second spiral into mania in 1955 that she met her therapist, Dr. Martin Orne. During their therapy sessions, Dr. Orne began encouraging Sexton to take up writing. The poet attended John Holmes’s poetry workshop, where it was discovered that she had an incredible knack for poetry. And the rest, as they say, is history.

Her Kind: A Stanza-by-Stanza Analysis

Anne Sexton’s famous poem, Her Kind, explores the struggles of its persona to conform to the societal expectations and norms levied against women during the early to mid-20th century. During this period, women were expected to live a certain way—to grow up to be future wives, mothers, and homemakers, with little wiggle room to be anything else. In other words, a woman’s path was paved but incredibly narrow, bright but harshly lit, with a lobotomy waiting at the end of it. But the voice of Her Kind is unwilling, or maybe even unable, to minimize herself to fit the strict confines of society’s definition of woman. She cannot and will not be boxed in.

Now, to illustrate the character’s defiance, Sexton divides the poem into three sections, with each stanza showing a specific side of the persona. In the first stanza, the persona presents herself as a lonesome suburban witch. The next stanza, she’s a lonely housewife or mother. And finally, in the last stanza, the persona paints herself as a defiant adulteress about to face her execution. Written in the first person, Her Kind reads more like a declaration of self, an affirmation of identity, rather than a simple retelling of the character’s life. It is the persona’s rebellion against the dictates of a society seeking to restrict her identity by telling her who, what, and how to be.