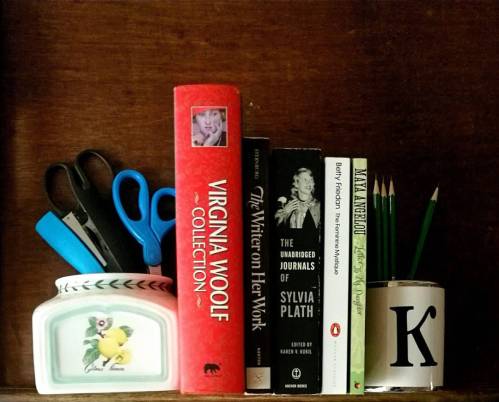 Today is International Women’s Day—a day to commemorate the social, political, cultural, and economic contributions of women throughout history. To celebrate this beautiful event, I’ve decided to share the five writers whose works have helped shape me into becoming the woman I am today.

In Kate Bolick’s seminal piece, Spinster, she borrows the term ‘awakeners’ from Edith Wharton to describe the five historical and literary figures who, through their works, have become her boon companions for life. The following women serve as my constant companions, my top five personal awakeners.

While most readers appear to have discovered Jane Austen’s works through school, I actually first became acquainted with her novels through the 1995 period film, Sense and Sensibility. I was enamored with Emma Thompson’s portrayal of Elinor Dashwood. She seemed to me the ideal woman—equipped with a quiet inner strength that I desperately wanted to possess. So, I did what any pre-teen fan would do. I saved up over a week’s worth of allowance and bought a copy of the Jane Austen novel.

It wasn’t love at first sight. My 12-year-old self, (I caught the film almost three years after its release), liked Sense and Sensibility enough but was yet to fully comprehend the complexity and wit of both novel and writer. It would take another four years before I picked up another Austen novel—this time, Pride and Prejudice. And I’m happy to say that it was an Austen lovefest from then on.

And while Mansfield Park was a ‘miss’ for this particular miss, I’m still very much in love with the rest of Jane Austen’s novels. So much so that every year I actually hold an Austen reading marathon. All six novels in one month. I also still look up to many of Austen’s female characters and wish I were a little more like them, specifically Elinor Dashwood and Anne Elliott.

It’s a story I’ve told before—how I fell in love with Sylvia Plath and writing after my creative writing teacher launched into an impassioned reading of Plath’s poem, Mirror. I was in junior year and was determined to be a lawyer. Except, when my teacher read Mirror out loud to a quiet class, I was overwhelmed by this strange, terrible, exciting, and terrific stillness that stayed with me for days. This ache, as if I was balancing on some precipice but didn’t quite know if I was going to fall into an abyss or shoot up straight through the sky. I believe the word is ‘overcome.’ I was overcome with a maelstrom of emotions that I could not and still cannot even begin to describe. That was the day when I realized that the one thing in life I wanted to be was a writer.

Years later, I came upon a quote by Emily Dickinson. She said, “If I read a book and it makes my whole body so cold no fire can ever warm me, I know that is poetry.” And Mirror was that and more, so much more. Until today, I feel wonderfully tethered to Sylvia Plath’s works, as if attached to them by an unseen umbilical cord. Plath speaks the rhythm of my pulse.

Other posts on Sylvia Plath:

My introduction to Virginia Woolf had less to do with her novels and more to do with her groundbreaking essays—A Room of One’s Own and Three Guineas. On my first trip to the United States back in 2008, I found a copy of a book containing both essays in the Barnes & Noble on 5th Avenue. A Room of One’s Own and Three Guineas was one of the ten books I bought on sheer impulse that day. The fact that I can’t remember what the other nine books are is testament to the impact these essays have had on my person.

I remember taking three months to finish each essay—not because they were hard to understand. On the contrary, they are actually easy and quick reads. But because each essay was densely packed with immortal truths, I couldn’t get through a page without feeling—there’s that word again—overwhelmed. I must have put the book down hundreds of times to record my thoughts about the plight of women then and now. These works opened my eyes to how the struggle for gender equality remains, though it does so in a different plane.

While I’ve always tried to maintain an egalitarian mindset, Virginia Woolf’s A Room of One’s Own was admittedly my first foray into the world of feminist literature. Through her writings, Woolf had ripped off the bourgeois Band-Aid of semi-privilege that kept me from looking past my own experiences. It dismantled the wall of apathy and self-centeredness that I had built in the guise of self-preservation. And thanks to writers like Woolf, there’s simply no going back.

I first came across Maya Angelou’s works in one of the many incarnations of Chicken Soup for the Soul—probably Chicken Soup for the Woman’s Soul. I was a teenager then, so full of angst and crippled by a lengthy list of mundane insecurities. So, when I found Phenomenal Woman at the start of the book, I was completely bowled over. It felt as if the writer was talking to me directly and reminding me that it was okay to be different—in fact, it was more than okay, it was marvelous.

I loved the poem so much that I kept a copy of it in my diary. Every morning, I’d read the poem out loud while getting ready for school. But apart from being inspired, I was intrigued. Who was this Maya Angelou writer, and what made her so magnetic? Those questions were answered when I chanced upon a copy of Singin’ and Swingin’ and Getting’ Merry Like Christmas in a secondhand bookstore. What a find!

To say that Maya Angelou’s life and works inspire me would be an understatement. Her fortitude, talent, and resilience are all qualities I wish to eventually possess. If I could be half as great as Maya Angelou, I would be the luckiest girl in the world.

Of course, this list wouldn’t be complete unless I include one of my absolute favorites—JK Rowling. The first book in the Harry Potter series came out just when I was entering high school. I remember borrowing a copy of Harry Potter and the Philosopher’s Stone from one of my high school friends, not really expecting anything other than an entertaining read. But what I found was something great, I found magic.

There’s something about the JK Rowling’s Harry Potter series that’s so timeless. It speaks to readers of all types at all ages. When I read the first four books as a bookish teen, I had found it so gratifying to find a heroine that I could identify with. As a teen, I was a lot like Hermione Granger. (I still am, actually.) I was swotty, bossy, socially awkward, and so much of an unbearable know-it-all that I actually got kicked out of my high school group of friends. I spent the final two years of high school holing up in the library and reading all the books I could get my hands on.

Nowadays, when I revisit Harry Potter, I find myself once again in awe but for a different reason. JK Rowling may have conjured an entire world that’s so different from ours, but it is a world that reflects the very same struggles we have today. In the books, we see the golden trio fighting the good fight against oppression, segregation, intolerance, censorship, and injustice. These are all evils that remain prevalent ‘in real life,’ and the courage of JK Rowling’s characters is just what we need to overcome these problems.